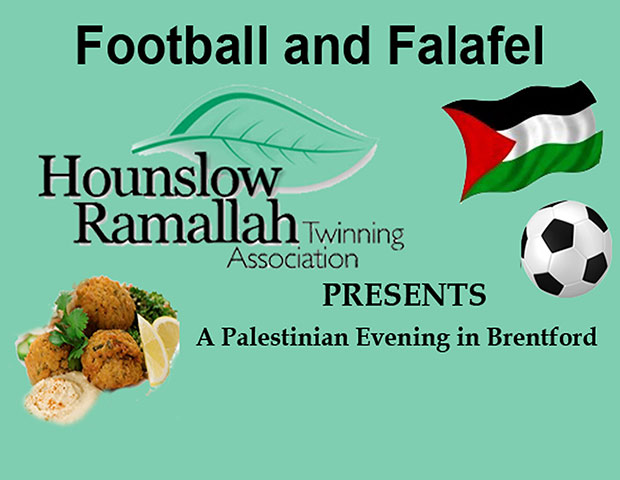 A capacity crowd packed into the Docking Station in Brentford High Street on Saturday 12th October 2013 for the kick-off of Hounslow-Ramallah Twinning Association’s football project.

The compere for the evening, Andree Ryan, spoke about the aims and benefits of twinning between Britain and Palestine. Andree handed over to Aun Qurashi who explained the history of the unique Hounslow-Ramallah relationship, the Twinning Association’s objectives, its recent and current projects, and the purpose of ‘Football and Falafel’.

Hugh Tisdale then introduced his film ‘State of Play’. Produced earlier this year in and around Ramallah, the film gave a fascinating insight into the enthusiasm and passion that exists for the beautiful game amongst ordinary Palestinians. Despite the presence of very real day-to-day challenges, the enduring message was one of hope and of the power of football to unite and inspire across boundaries.

The audience showed enormous appreciation for Hugh’s efforts, and was then positively overwhelmed by Mark Devlin’s great expression of support and commitment on behalf of Brentford FC for HRTA’s football project.

A lively open discussion on the possibilities ahead followed – friendly matches, tours, training and coaching were all mentioned – and the talk was fuelled by wonderful Palestinian fare of fresh falafel, khoubz, salad, houmous, pickles, olives, exotic juices and ma’amoul pastries.

The evening’s entertainment went into full swing with a traditional ‘dabkeh’ dance performance by the five Jarche Sisters in Palestinian costume, and proceedings were rounded off by a draw for generous raffle prizes.

At the final whistle, Football and Falafel’s desired result had been achieved – raising awareness of the Twinning Association’s work, increasing membership and funds, and most importantly getting the football project off to a flying start.

There is no denying that the game of football has developed beyond mere sport into an international phenomenon with great unifying potential. With such enthusiastic backing from Brentford Football Club, the possibilities of HRTA’s football project look very interesting.

One thought on “Football and Falafel”