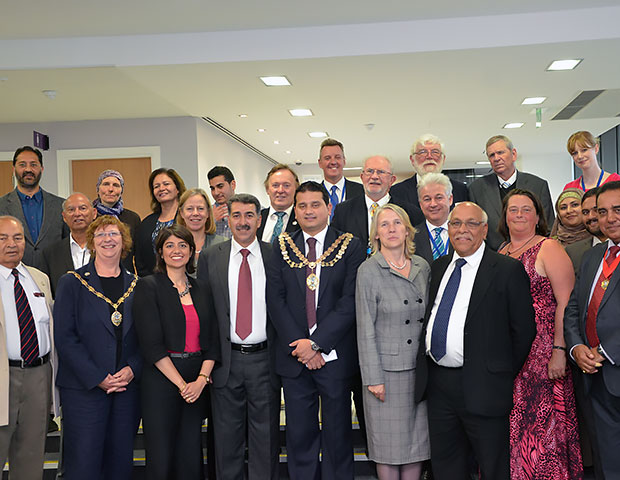 Monday 9th September 2013 was a landmark day in the historic twinning relationship between the London Borough of Hounslow and the Palestinian city of Ramallah as the Mayor of Ramallah, Mr Mousa Hadid, was officially welcomed to the Borough.

The morning saw Mayor Hadid, accompanied by his university-bound son Farah, greeted in Osterley Park by six Twinning Association members. A guided tour of Osterley House, including a chance to look at fascinating artefacts in rooms not often seen by the public, was followed by a traditional English lunch in the converted stables tea-room.

Osterley Park was a wonderful setting in which to have a stimulating exchange of ideas about future twinning projects.

A heartening speech about the history and value of the Borough’s twinning with Ramallah-al-Bireh was given by Cllr Jagdish Sharma. This was complemented by equally positive contributions from Seema Malhotra MP and Mayor Sachin Gupta.

Mayor Mousa Hadid responded with inspiring words about the city of Ramallah and his commitment to strengthening the relationship with Hounslow. He concluded with an invitation to Mayor Sachin Gupta to visit Ramallah during his term of office.

Contact details were exchanged over canapés and drinks, official group photographs were taken, and a meeting set up for the following morning for Mayor Hadid to discuss projects with Council officials.

All in all, it was an uplifting day which bodes well for the future of the twinning link between Hounslow and Ramallah. There is much to look forward to.