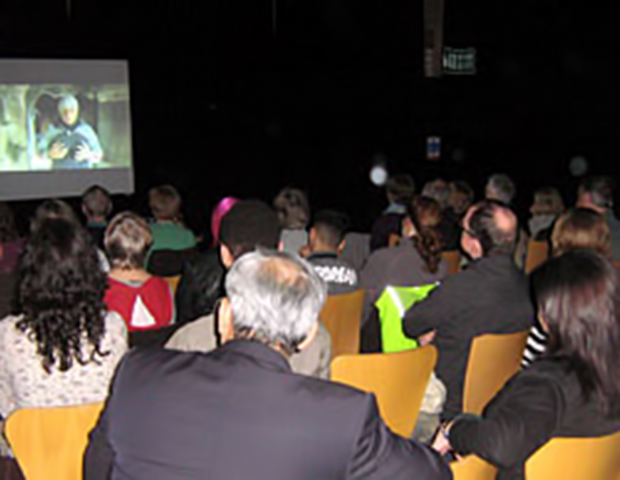 The Hounslow-Ramallah Twinning Association hosted the UK premiere of the documentary film ‘Insha’Allah’ on Saturday 30th October 2010 at the Watermans Arts Centre. The film was followed by a live video link with cast members in Palestine.

The event was organised and introduced by our Press Officer, Sana Serroukh, as the inspiration behind HRTA’s own forthcoming documentary film project, ‘Postcard from Hounslow’. This will be a short documentary about the London Borough of Hounslow to be filmed in early 2011, which we intend to send to our friends in Ramallah.

The event also had a fund-raising purpose for the Twinning Association, and a wide range of items of Palestinian arts, crafts and foodstuffs were available to buy on the evening.

The documentary itself was presented in person by its author, Californian film-maker Maurice Jacobsen. The film took us on a 90-minute video tour through Gaza, from Erez in the north to Rafah in the south. All aspects of daily life were featured, including visits to ordinary people in their homes and interviews with shop owners, workers, musicians and artists. The film was very thought-provoking and Maurice was pleased to answer questions from the audience.

The live video link with cast members was perhaps the most memorable feature of the evening. Face-to-face questions came from a diverse range of individuals in the Borough, including a teacher, a 10 year-old schoolgirl, and a community environmental activist. We learnt from the responses about the value placed on education by young people in Gaza, about the openness of people in relating their everyday experiences, and even about the white donkeys in Gaza zoo which, with the benefit of painted stripes, entertain the local children as zebras!

It was a wonderful evening and the Hounslow-Ramallah Twinning Association wishes Maurice and his team well as they take the documentary on a tour of the UK, Europe, north America and the Middle East.