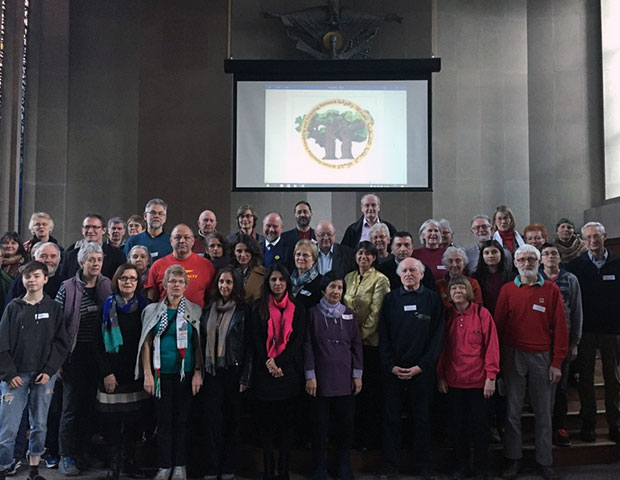 They came from Dundee, from Liverpool, from Swansea and mid-Wales; from the north of England, from the Midlands, from the west-country and the south-east.

Representatives of more than twenty Britain-Palestine groups travelled from across the land to gather together on Saturday 28th January 2017 in the striking central space of Holy Trinity church in Hounslow.

Hounslow-Ramallah Twinning Association was the host of this year’s Britain-Palestine Friendship & Twinning Network conference, and the sixty-plus attendees were welcomed with a roll-call by HRTA Secretary Aun Qurashi. Well-received words on the background of Hounslow-Ramallah and an illustrated history of the Association’s achievements were followed by Cllr Ajmer Grewal, Mayor of Hounslow, taking to the stage and speaking of her pride in the Council’s twinning with Ramallah and her desire to visit Palestine.

Dr Aimee Shalan, Director of Friends of Birzeit University, explained to the conference the challenges and wilful obstructions placed in the way of Palestinian students attempting to pursue their education, while Brendan McSharry, Director of the British Council in Palestine, talked about the role of his organisation and the assistance available for schools links through the Connecting Classrooms initiative, adding that the work of twinning groups is a ‘lifeline’. A Q&A session was followed by a rousing and impromptu speech by Stephen Pound MP of Ealing North.

Conference Chair Tony Pearce then introduced Professor Manuel Hassassian, Palestinian Ambassador to the UK. Professor Hassassian spoke with passion about Palestinians’ increasing desperation for freedom from occupation through peaceful means, of the continued failure of the political process, and of the need for help from friendship and twinning groups through support for the Make it Right for Palestine in 2017 campaign.

HRTA member Ruth Cadbury MP, who represents the Borough’s eastern half, then described her experience of visiting the West Bank earlier this month after a gap of more than thirty years as part of a cross-party parliamentary delegation, stressing also how twinning serves to remind people in this country of the situation in Palestine.

The afternoon session began with Twinning Network patron Sir Vincent Fean speaking about a growing student-exchange initiative in higher education, as well as the importance of raising the profile of the non-violent struggle for Palestinian rights during 2017 – a year that marks 10 years of Gaza closure, 50 years of occupation, and 100 years since the Balfour Declaration.

HRTA supporter Seema Malhotra MP, who represents the Borough’s western half, further praised the work of Britain-Palestine friendship and twinning groups and spoke of the importance of continuing to press politicians.

The Twinning Network’s new DVD, shortly to be available on YouTube, was launched by its producer Samiha Abdeldjebar. A trailer of selected interviews with friendship and twinning group representatives was shown and was appreciated by all as an effective way of publicising the benefits of linking home communities with Palestine.

Twinning experiences, challenges and successes were then discussed in groups and feedback presented to all participants in a plenary session. Helen Marks took the opportunity to tell attendees about a forthcoming Palestinian women’s football team tour to Bristol, Liverpool and Leeds, and a charity bike-ride was also publicised.

The Chair brought the conference to a close at the end of a productive and informative day, with thanks to all, and a short AGM of the Twinning Network followed.

Hounslow-Ramallah Twinning Association congratulates the Britain-Palestine Friendship & Twinning Network on a successful conference which it is pleased to have hosted.