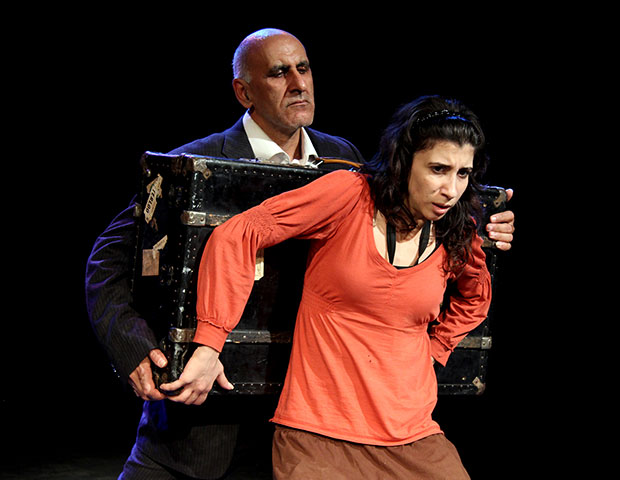 Actors Edward Muallem and Riham Isaac of Ramallah’s Ashtar Theatre group gave an enthralling performance of the play “48 Minutes for Palestine” to an audience of over a hundred at the Paul Robeson Theatre in Hounslow on 15th June 2015.

Performing without words, the two relied entirely on physical action and music to tell the allegorical story of a man and a woman living together against their will, engaged in a struggle for space and power with temperatures rising and water running out.

At the culmination of 48 captivating minutes, audience members showed their appreciation by giving a standing ovation to the Palestinian duo.

The performance was followed by announcements from HRTA’s Chair Alison Wernberg-Moller and Secretary Aun Qurashi, thanking the 24 individual donors and two local business sponsors who had supported the crowd-funding campaign to make the event possible, and acknowledging the presence of the Mayor of Hounslow, Councillor Nisar Malik.

HRTA Committee member Lawrence McCambridge-Audini then chaired a Q&A session, giving the audience an opportunity to ask the actors, joined on stage by co-writer/director Mojisola Adebayo, questions about the play.

Following the success of this event, the Twinning Association looks forward to future opportunities of collaborating with Ashtar Theatre.